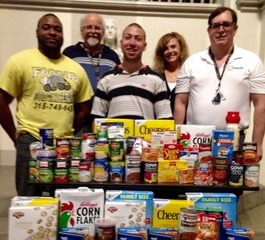 St. Margaret's Food Pantry at Grace Church recently conducted their 3rd Annual, "April Showers Food Drive, to help wash hunger away" campaign. This month long, fundraising event involved the participation from both our parishioners and the community for the direct benefit of our Food Pantry.Week after week, we would inform the parish of what our pantry needs were, while reaching out to the community through our local newspaper and facebook page to encourage their involvement as well. This year's campaign helped us to raise $1,604.00 in monetary donations and provided us with 307 food items, which was a major increase from our 2016 efforts that raised $1,002.00 and brought in 116 food items.

In mid-May, St. Margaret's Food Pantry at Grace Church, along with several other area pantries were the recipient of the recent "Stamp Out Hunger Food Drive" that took place on Saturday, May 13, 2017. This annual event involved our local postal workers and community donators. Very special thanks the community supporters, and to our workers and volunteers, Clint Carpenter, Dominick Garcia, Curtis VanNostrand and Frank Walczak for the use of their vehicles and for participating in both the pick-up and delivery of the 577 food items directly to our pantry.

On May 28, 2017, the food pantry was an active participant of World Hunger Day, an initiative by The Hunger Project that aims to celebrate sustainable solutions to hunger and poverty. We were approached by two local business', Jack & Mo Cooking Show and FooCab, who asked if we would partner with them to help raise hunger awareness and be a recipient of their Food Drive in support of World Hunger Day.  We all worked together and compiled our thoughts which resulted in this food drive being titled, "Food For Hope".  We hoped to raise 200 pounds of food in just 6 short days by placing collection bins at several area restaurants. Two days later we were filmed and interviewed by our local television station, spreading the news of this global hunger crisis and this community effort. This opportunity allowed both Jon White of FooCab and Jack Pflanz of Jack & Mo Cooking Show, the opportunity to share their own personal stories of why raising hunger awareness was important to them. This broadcasting event also allowed us to share some statistics, such as 795 million people do not have enough to eat, 60% of the worlds hungry are woman, 98% of the undernourished live in developing countries and hunger kills more than AIDS, Malaria and tuberculosis combined. Unfortunately, we came up short in meeting our goal of 200 pounds of food (167 pounds) but the local attention we received in support of this global cause was amazing. We are very appreciative that Jack and Jon chose our pantry to partner with and look forward to working together on other events in the near future.

All of these hunger awareness events that we participate in, offers proof that our little pantry is doing big things!