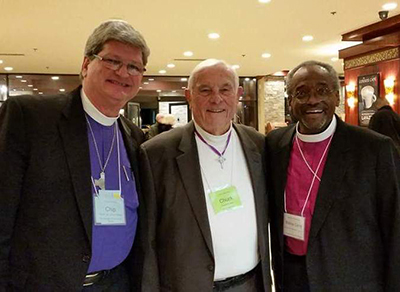 The Rt. Rev. Chip Stokes, Canon Chuck Perfater, and the Most Rev. Michael Curry
At the Diocese of NJ Convention on March 5, 2016, Canon Chuck Perfater, who is also the Executive Director for Province II,  was presented The Bishop’s Cross for Distinguished Service. This is the first time this award has been given, so he is the inaugural recipient.

It was a special honor to have the Presiding Bishop, the Most Rev. Michael Curry, present, along with the Rt. Rev. Mark Beckwith (Diocese of Newark) and the Rt. Rev G. P. Mellick Belshaw (Retired, Diocese of NJ).  In addition to the Cross, Perfater received a proclamation making Friday, March 4, 2016 “Chuck Perfater Day”.  The proclamation read in part…

“Canon Charles (Chuck) Perfater was born and raised in Ewing Township, NJ, where he still resides with his wife of 60 years, June Cooper Perfater”.

“Chuck has been a lifetime parishioner at Trinity Cathedral where he has served in many leadership capacities, including Stewardship Chair (or co-chair) for the past 35 years, Jr. Warden, Senior Warden (eleven consecutive years), Treasurer (seven years), and Chair, Trinity Cathedral Community Day Golf Event (ten years).  He also serves as a lay Eucharistic minister, usher and lay reader.

In the late 1980s, Chuck became involved in diocesan activities.  His initial leadership role was on the Committee for a Unified Budget Exploration [CUBE] (1990 -1992), followed by service as the Diocesan CFO (1994-1996), multiple terms on the Finance & Budget Committee (continuing)…and three subsequent financial task forces.  He has served on the Audit Committee, Board of Missions, Diocesan Council, Episcopal Election Committee (2002-2003), Stewardship Commission-Chair (2009-2014) and two terms on the Standing Committee, where he is currently the Property Manager.

In addition to serving the Diocese, Chuck has contributed to the wider Church as a six time deputy to General Convention, where he was assigned to the Standing Committee on Program, Budget & Finance in 2012 and 2015.  He also was the Diocesan Administrator and Deputation Secretary. He has been serving as the Executive Coordinator, Synod of Province II (all Dioceses in NJ, NY, the Virgin Islands, Haiti and Europe) for the past thirteen years.

Chuck and June have two grown children, Jeff and Susan, and one grandson, Sasha. They spend several months each year at their summer home on Long Beach Island, where Chuck has become quite active at St. Peter’s at the Light, including service on the Futures Committee.” 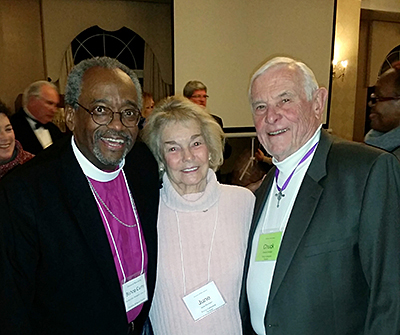