Tropical storms are devastating in Haiti 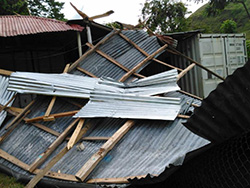 Tropical Storm/Hurricane Earl Hits Haiti! Extensive Damage In Rantlamouaie
A severe tropical storm affected the Dominican Republic on July 31 and August 1, 2016, causing floods in several locations, and damage to houses and roads. The tropical storm then moved towards Haiti, a country extremely vulnerable to floods.

Several neighborhoods of Port-au-Prince, Haiti, are still suffering the effects of a previous storm earlier in July. Due to the intense rain, river and canals in Cité Soleil community overflowed, filling with water, garbage and human waste in one of the poorest areas in the country. According to local news, the situation has not yet improved, and as many as 6,000 families are living in precarious conditions in inundated areas prone to contamination.

Haiti and Dominican Republic suffered several major flood events between February and May this year. Dozens of people have died and thousands forced from their homes after a series of storms brought torrential rain across the island of Hispaniola.

Even though Earl has moved on just like Tomas, Ike, Hanna, Gustov, Fay, Dennis and many others (not to mention the earthquake) the people are left to rebuild yet again.

To Love a Child, a non-profit organization that does work in Haiti and Zimabawe and is affiliated with the Diocese of Albany, reports the loss of all the classroom roofs in Rantlamouaie and severe flooding and roof damage at an orphanage in Port au Prince.