The leadership and the people of Province II of the Episcopal Church mourn the passing of Canon Charles H. Perfater.
Perfater served as Province II Coordinator from 2004 to 2016.  Active for many years in the Diocese of New Jersey, Perfater died on June 29. 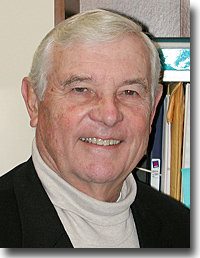 Honors
At the Province II Synod in April 2018, a resolution honoring Perfater was unanimously approved and presented to him. The resolution reads, in part,
Whereas Canon Charles H. ("Chuck") Perfater, a faithful member of the Episcopal Church in the Diocese of New Jersey, has faithfully served his parish, his diocese, and his province in numerous official capacities;
Whereas he has coordinated all the activities of Province II for these many years;
NOW, THEREFORE, BE IT RESOLVED that Province II of the Episcopal Church is grateful to Canon Charles H. Perfater for his service and publicly recognizes the outstanding leadership he has provided as the Executive Coordinator. His leadership distinguishes him, honors the Province, and marks a deep commitment to the Episcopal Church.
Tributes to Chuck and more information is below the slide show.  A copy of the press release may be downloaded here.
Note: Tributes will be added as received.
Program from the Vigil, July 2, 2019
Bulletin from the funeral, July 3, 2019
Video of the funeral service: https://vimeo.com/346031116/b26f37ef98
Chuck has been a lifetime parishioner at Trinity Cathedral where he has served in many leadership capacities, including Stewardship Chair, Jr. Warden, Sr. Warden, Treasurer, and Chair, Trinity Cathedral Community Day Golf Event. He also served as a lay Eucharistic minister, usher and lay reader.

In the late 1980's, Chuck became involved in diocesan activities.  His initial leadership role was on the Committee for a Unified Budget Exploration, followed by the CFO role, multiple terms on the Finance & Budget Committee and three subsequent financial task forces.  He has served on the Audit Committee, Board of Missions, Diocesan Council, Episcopal Election Committee, Stewardship Commission, Chair, and Standing Committee.

In addition to serving the Diocese, Chuck has contributed to the wider Church as a six time deputy to General Convention, where he was assigned to the Standing Committee on Program, Budget & Finance.  He also was the Diocesan Administrator and Deputation Secretary, and served the Synod of Province II. He was recognized for his outstanding leadership he has provided as the Executive Coordinator of Province II.

Chuck, a faithful member of the Episcopal Church in the Diocese of New Jersey, has faithfully served his parish, his diocese, and his province in numerous official capacities.  Chuck was the first (and only to date) to be honored with the Bishop’s Cross at the Diocesan Convention in 2016.

Chuck and June have two grown children, Jeff and Susan, and one grandson, Sasha. They spent several months each year at their summer home on Long Beach Island, where Chuck has become quite active at St. Peter’s at the Light in Barnegat Light, including service on the Futures Committee.  He is also President of the North Beach Taxpayers’ Association.

Chuck was an avid golfer, enjoyed cooking and travel.  He was heavily involved in researching his family genealogy, where his Family Tree grew to include over 8300 names.  He recently confirmed that he is a 4th Cousin of the 34th President of the US, Dwight David Eisenhower

The Rev. Dahn Dean Gandell
President, Province II
As the President of Province II, I want to thank God and celebrate the life and witness of Chuck Perfater.  He served as the Executive Director of our Province for a number of years.  Chuck was a mentor to me for the years I was the clergy representative on the Provincial Council, and helped me make the decision to run for Executive Council.  Even though Chuck and I were miles apart politically, we were united in our love of Jesus, Province II, and the Episcopal Church.  My condolences to Chuck’s family.  May he rest in peace and rise in glory.

The Rt. Rev. William H. Stokes
Diocese of New Jersey
I am deeply saddened by the death of Canon Chuck Perfater and offer my sincerest condolences to June and the Perfater family.  This is a great loss to them, to the church as a whole, to Province II and to the Diocese of New Jersey which nurtured Chuck as a Christian and which has benefited from his faithful service his entire adult life.  I feel the loss of a trusted friend and counselor.  Chuck was a “Churchman” in the very best sense of the word.  He loved his Lord, he loved The Episcopal Church (even when he occasionally disagreed with some of its positions), he loved the Diocese of New Jersey, he loved Trinity Cathedral and, in his later years, St. Peter’s-at-the-Light in Barnegat Light.  His long-time service as a member of Cathedral Chapter, as a delegate to Diocesan Convention, as a senior Deputy to General Convention, his faithful leadership at every level in the Diocese of New Jersey including a stint as Chief Financial Officer, member of Diocesan Council, member of Standing Committee, Trustee, member of the Visioning Committee, have all been an incredible gift.  At the nomination of The Right Reverend George E. Councell, Chuck was installed as an Honorary Canon of Trinity Cathedral in 2009.  In 2016, I created a diocesan award for outstanding lifetime service to the Diocese of New Jersey and the wider Church: The Bishop’s Cross. This award is not intended to be an annual award; it is meant to be an occasional award for persons whose service is extraordinary.  Chuck Perfater was the first and is, so far, the only, recipient of The Bishop’s Cross.  It was well-earned and he wore it with great pride.  Well done good and faithful servant…enter into the joy of your master.
The Rt. Rev. Lawrence Provenzano
Diocese of Long Island
Today, the news of Chuck Perfater’s death marks a profound passing of the torch in the ministry of our common work as a Province.  For so long, even after his retirement as the executive director of the Province, Chuck has personified a deep faithfulness for the structure and ministry of Province II.
For the seven years as I served President of Province II, Chuck was the energy, vision and voice of all that we accomplished.  A churchman of strong faith, strong opinions and ideas, Chuck was lovingly one of a kind.
I know that I join countless people in offering my prayers, support and gratitude to his wife and family for their gift of Chuck’s ministry to the Province and wider Episcopal Church.  May he rest in peace, and rise in the glory of the risen Christ, whom he loved and served so faithfully.

Michael F. Rehill
Diocese of Newark
It is with a profound sense of loss that I learned this morning of the passing of my dear friend and colleague, Canon Charles ("Chuck") Perfater. I have known Chuck for many years both as a deputy to several General Conventions, representing the neighboring Dioceses of New Jersey and Newark, and through our work together in Province II of the Episcopal Church. While serving as Vice President of Province II, I was asked by Bishop Jack McKelvey, then Bishop of Rochester and President of the Province, to meet with Chuck as a possible appointee to the position of Provincial Executive.  When I met with Chuck, we discussed our visions of the future of the Province and its role in the Episcopal Church. I had no doubt that he was the person we needed for that position. I was delighted when Bishop McKelvey agreed and made that appointment. When I succeeded Bishop McKelvey, I regularly reappointed Chuck as Provincial Executive, and he served in that role through my six years as President of the Province.  He was a good administrator and an even better friend. He was tireless in his devotion to the Church.  Although he and I did not always agree on some issues the Church faced, I always knew him to be thoughtful and faithful and respectful of opinions contrary to his own. As Chuck is greeted by our Lord, I have no doubt that he will hear the words from the Gospel of Saint Matthew, "Well done, good and faithful servant!"  Let us all lift a glass to Chuck Perfater to speed him on his way.  To quote Michael D. Higgins, President of Ireland, "We will not see his like again." I will miss you, good friend.
Canon Rosalie Simmonds Ballentine, Esq., D.H.L.
Diocese of the Virgin Islands
I know of no more ardent advocate than Chuck for the role of Provinces in the governance and life of our church.  His commitment and leadership extended not only to Province II, but he was central to the working of the Provincial Leadership Council.  I was privileged to serve on Provincial Council while Chuck served as its executive.  His tenacity; his focus on functioning networks that could assist in providing programs to the dioceses; and his willingness to provide resources are some of the traits that I recall with deep appreciation and respect.  On behalf of the Diocese of the Virgin Islands, and on my own behalf, I extend deepest sympathy to his family.  May his soul Rest In Peace.

Dorothy-Jane (Goldsack) Connolly
Province II
I was truly saddened to hear of Chuck’s passing. I have known Chuck essentially my entire life. He served the Church faithfully through his work in the Diocese of New Jersey and Province II and in countless other capacities. He and my father, the late Canon John Wood Goldsack, Esq., worked side-by-side for many years to further the work of the Church they both dearly loved. One of my fondest memories of Chuck was attending a Phillies game during a free evening at General Convention in Philadelphia. It has been my honor and privilege to serve alongside Chuck in various capacities over the past two decades to further the ministry of Province II. May he rest in peace and rise in glory.
Canon Paul Ambos, Esq.
Chancellor, Diocese of New Jersey
Although I, like anyone else involved in diocesan matters in the 21st Century, was aware of Chuck Perfater's ubiquitous activities in support of the Church, I only began to interact with him on a personal level in the lead-up to the 76th General Convention in 2009.  I was a mere first-term alternate deputy, while Chuck had been going to General Conventions since 1994.  The tradition of General Convention deputations in our diocese is to meet monthly for about one-and-one-half years before the actual convention, in order to get to know each other and to prepare ourselves for the grueling week-and-one-half that the Convention takes.  Chuck was then (and perhaps as ever) the most conservative member of the deputation.  I enjoyed discussing church issues with him:  He would occasionally convince me to change my mind on matters, and I occasionally would convince him to change his.

I was privileged to nominate Chuck for the Conventions of 2012 and 2015, even though he felt that his minority voice didn't need to be heard.  His progressing illness precluded him from agreeing to attend in 2018.  On the level of Province II, he agreed to extend his service as Provincial Coordinator at least two times after he had planned his retirement from the office.  Yet he still continued as an advisor and source of institutional memory for many.
​
Chuck's example of competent and faithful service to the Church he loved will be missed.
Carolyn Belvin
Province 2 ECW President and Diocese of New Jersey ECW board member
I was saddened to learn of the passing of Mr. Perfater.

I am thankful for his knowledge and guidance that he provided to the Episcopal Church Women of the Diocese of New Jersey as we prepared to attend the ECW Triennial Meetings over the years.  I remember that he always made sure that while at General Convention we were included in the Province 2 gatherings.
I will miss his friendly smiles and greetings when we were in different cities across the country.

I extend my  condolences to his family.
May he rest in peace.